f8 Photo Studios, one of the leading, award-winning photography studios in North Carolina’s Raleigh/Durham/Chapel Hill “Triangle” region, is celebrating 15 years in business this year. To mark that occasion, owner and lead photographer Cara Powell is evolving her brand to better reflect f8’s reputation and expanding areas of expertise.

“Fifteen years ago I took a leap of faith and followed a dream,” Powell said recently. “Everything that I envisioned f8 growing into became a reality and more. I am a huge proponent of visualizing your future in order to send you on the right trajectory in your present. Right now my future looks bigger than this business itself. I’d love to be able to keep doing what I love in order to fuel the big projects that feed my soul and help my small part of the world.”

Originally from Charleston, SC, Cara Powell founded f8 Photo Studios in Raleigh in 2004 specializing in creative wedding photography, portraits, and commercial imagery. Since then, she has become known primarily for creative, high-end wedding photography that has received numerous awards. Her work has been featured in a host of publications and blogs (see “About” below), and is frequently cited for capturing the sort of “true emotions” and “one-of-a-kind moments” more indicative of photojournalism than typical wedding photography. 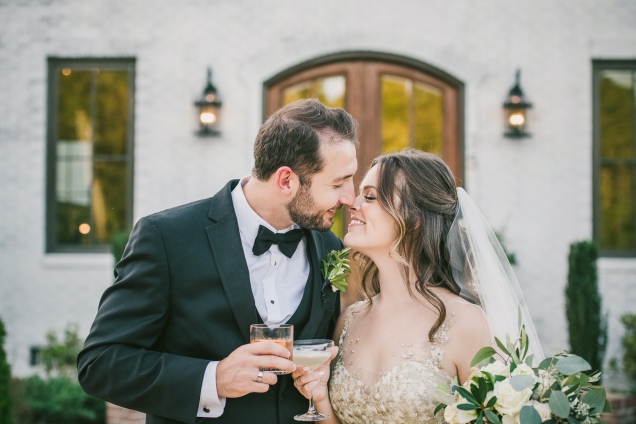 “I love shooting weddings,” she said recently. “I love the beauty, the emotions, the fun, and capturing all of it in my camera.”

Yet also over the past 15 years, Powell and her team have built a substantial portfolio of commercial work, including interiors and corporate portraiture.

So to mark her 15th anniversary, Powell decided to refresh her studios’ brand identity, rather than change it dramatically, since the reputation and equity she’s built under the previous identity are valuable assets. And she still loves the signature orange she chose in the beginning, she says, to reflect her passion and enthusiasm for her work, along with a sense of warmth and professionalism.

To create f8 Photo Studios’ fresh, more inclusive visual expression, Powell has enlisted brand identity and website designer Hannah Lee of Foxwood Studio in Hillsborough, who will upgrade the studio’s website as part of the rebranding.

For the past eight years, f8 Photo Studios’ wedding photography has been included in the “Best Of” editions of The Knot magazine – the premiere wedding planning resource in the U.S. — based on client experiences and reviews. As a result, Cara Powell was inducted into The Knot‘s prestigious “Best of Weddings Hall of Fame” (2017-2018), which honors only two percent of the nation’s wedding vendors.

Based on other wedding vendors’ votes, f8 Photo Studios received a “Best of Borrowed & Blue Award” for the 2017-2018 season, the equivalent of a “Michelin Star” for the wedding industry. Powell has also received seven “Wedding Wire Couple’s Choice” awards recognizing local wedding professionals “who demonstrate excellence in quality, service, responsiveness, and professionalism.”

Powell is also committed to ongoing community involvement, donated her time and resources to local charities.

f8 Photo Studios is located in The Loading Dock at 1053 East Whitaker Mill Road, No. 115, in Raleigh. For more information, visit www.f8photostudios.com.