March 17, 2011 (Hilton Head, SC) – Rick Ingersoll, better known to frequent travelers and travel hackers as “The Frugal Travel Guy” who writes a popular blog by the same name, is on a mission to teach others how to do the things he does so that they, too, can travel anywhere they want for free or nearly free. He teaches them how to accrue frequent flier miles through rewards programs and travel vouchers through such methods as “the bump” (intentionally getting “bumped” from your flight).

Recently, he sat down to share his particular method for getting the best deals at good hotels.

“We all have our own method,” he said, referring to other frequent travel hackers like him. “I’ll describe mine step by step as I try a phantom booking in Indianapolis, Indiana, the night of April 13, 2011.”

He chose Indianapolis, he said, because he’s never been there, hasn’t done any prior research, and because he wanted to see how long the process would take (35 minutes, as it turned out). His hotel location would be determined by the availability of public transportation and the cost.

“My phantom meeting is downtown the next morning, with an evening departure that night. I’ll describe my methodology as I go. And remember,” he stresses, “I am a three-star kind of guy. No Econo Lodges for me.”

He starts at his computer by opening some browser windows:

“Step One is the airport website and ground transportation,” he says. “I hate renting a car in a strange city for one meeting downtown, and I’ve found that I can get an Express Bus for $7 each way. This information not only helps me get downtown, but it also opens up airport hotels and their shuttle buses back to the airport to catch the Express Bus downtown. Airport hotels are quite often cheaper than downtown hotels. I have that covered. Now it’s time to check out some prices.” 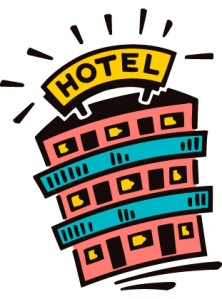 So he heads over to Kayak (www.kayak.com/hotels) where he can compare hundreds of travel sites at once. Kayak shows him that the least expensive, well-known, three-star chain hotel in downtown Indianapolis is the Sheraton at $129 per night. The airport search shows rates of $87, $90, $93, and $119 for hotels with shuttles.

“I now have retail prices so let’s find the deal,” he says.
He heads over to BiddingForTravel.com where page one shows accepted bids of $48 and $49 for higher-rated downtown hotels and $39 for a Radisson airport hotel.

“I may just stay downtown if it’s only $10 more, go the night I arrive, and be downtown already in the morning for my phantom meeting.”
Now he has more work to do. “I’d better do a TripAdvisor search on those three hotels to see if any of them are lemons,” he says. “Since I’m a month out, I have plenty of time to bid on Priceline in the range of accepted bids, but I’d better have a back-up plan.”

”I’m looking for Priority Club Points Breaks hotels for 5000 rewards points per night.” He finds one:  The Crowne Plaza airport location is a Points Break hotel for that night.

“My search may be over,” he says. “I could also check Hilton Point Stretchers and the Marriott’s discounted awards as well, but I find that the Priority Club Points Break is usually the best deal in town.”

He decides on the Priority Club hotel where he redeems 5000 points (which costs him $30 to obtain). Remember: the lowest retail price he found was $87. The airport has a 24-hour shuttle to and from the airport and TripAdvisor gives the hotel a solid thumbs-up.

What if he hadn’t found the Points Break hotel?

“I could have gone with the Expedia Best Price match guarantee to take $50 off the retail rate of another hotel. The lowest retail rate was $87 for an airport hotel, so I could have gotten in for $87 minus $50 or $37. Or I could have bid in the high $30s to low $40s for a room downtown or at the airport on Priceline [Priceline.com]. And if those ideas hadn’t found results, I would have checked SPG.com for a cash-and-points or all-points redemption with Starwood. It’s tough to beat that Points Break deal, though, when you can find it.”
Ingersoll posted information on his blog (www.frugaltravelguy.blogspot.com) about Expedia Best Price Guarantee (October 15, 2010) and Priceline/ BiddingForTravel.com (October 27, 2007). A search on the blog will reveal those two posts.

Rick Ingersoll will be a featured speaker at the Spring 2011 Frequent Traveler University session in Flushing, New York, on April 30. For more information on the FTU, go to www.ftuniversity.com.

About The Frugal Travel Guy:

Rick Ingersoll is the author of The Frugal Travel Guy Blog, which is read around the world and averages 5000 views per day, and The Frugal Travel Guy Handbook. He is constantly on the lookout for the best credit card and debit card sign-up bonuses. He posts travel tips daily on debit and credit card deals and on other interesting promotions with the goal of reducing his readers’ travel costs today and for the rest of their lives. He is also available for seminars and speaking engagements. A retired mortgage banker, Ingersoll and his wife live in Hilton Head Island, SC, and Traverse City, MI, when they’re not traveling the globe.