“November 8, 2016, marked the beginning of a surge in hate crimes in this country, including crimes directed at our LGBT citizens,” said Blueplate PR owner Kim Weiss. “The first time I read Midland Club, which is set in 1958, the relevance jumped off the page at me. 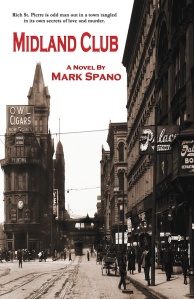 “Fear of that heinous type of crime informs how the book’s main character, Rich St. Pierre, responds to the death of a friend – a gay black man. Everyone in the mid-western city believes it was suicide. Rich knows better. I’m deeply honored to work with Thunderfoot Press to promote this gripping and relevant page-turner, which will remind readers of the best in noir filmmaking.”

Thunderfoot Press has published five works of fiction and a memoir by author and filmmaker Mark Spano.