opens at the Galaxy Cinema in Cary on Thursday, October 20, at 7:30 p.m., with the documentary “Rem Koolhaas: A Kind of Architect.” The series is hosted by Triangle Modernist Houses, an award-winning local nonprofit for the documentation, preservation, and promotion of residential Modernist design.

Rem Koolhaas, 67, is a Dutch architect, architectural theorist, and Professor in Practice at Harvard University’s Graduate School of Design. He won the Pritzker Prize in 2000 and Time magazine named him one of “The World’s Most Influential People” in 2008.

According to the film’s synopsis, “Rarely has an architect caused as much sensation outside of the architecture community as Rem Koolhaas.” Directed by Markus Heidingsfelder and Min Tesch, the documentary is “an engaging portrait of a visionary man [and] a visually inventive, thought-provoking portrait of the architect.”

Koolhaas himself has called it “the only film about me that I have liked.”

Special associated offer: Bombay Beijing, an Indo-Chinese restaurant across the street from the Galaxy Cinema, offers film-goers a free ticket for every $15 spent in the restaurant that night before the movie.

“Rem Koolhaas: A Kind of Architect” is the first of six architecture films in this year’s series.  They run on certain Thursdays monthly from October through March. To see the entire line-up, go to www.trianglemodernisthouses.com/movies.

Triangle Modernist Houses (TMH) is a 501C3 nonprofit organization established in 2007 and dedicated to documenting, preserving and promoting modernist residential architecture. The award-winning website is now the largest educational and historical archive for modernist residential design in America. TMH also hosts popular modernist house tours several times a year, giving the public access to the Triangle’s most exciting residential architecture, past and present. These tours and a host of other TMH-sponsored events raise awareness and help preserve these “livable works of art” for future generations. Visit the website at www.trianglemodernisthouses.com. TMH also has an active community on Facebook.

This season’s dates and films about architecture are:

Trailers and more information on each film are available at www.trianglemodernisthouses.com/movies.

“You might be surprised to know that we’re rapidly becoming the center for date night.  Whether people have known each other two days or 20 years, our movies are a guaranteed home run: entertaining yet thought–provoking, an audience with similar interests, great popcorn, and lots of door prizes!” says George Smart, TMH Board Chair.

All movies start at 7:30 p.m. Tickets at the door are $9 but season tickets are only $29, representing almost a 50 percent savings. Advance tickets, including season tickets, are available at www.trianglemodernisthouses.com/movies. Proceeds benefit TMH’s ongoing documentation, preservation, and promotion programs. 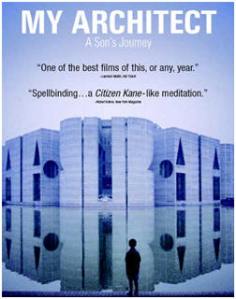 The first in a series of four films hosted by Triangle Modernist Houses.com

November 29, 2010 (CARY, NC) – The second annual Nowell’s Architecture Movie Series, featuring hard-to-find films about Modernist architects and architecture, opens Thursday, December 16, at 7 p.m. at the Galaxy Cinema in Cary with a special screening of “My Architect: A Son’s Journey.”

Presented by the nonprofit historic preservation group Triangle Modernist Houses, “My Architect: A Son’s Journey” is the Oscar-nominated documentary about the life and work of the world-renowned American architect Louis I. Kahn as told by his son, Nathaniel Kahn.

One of the most influential architects of the mid-20th century, Kahn’s taught at Yale University in 1947, received his Fellowship in the American Institute of Architects in 1953, was named Professor of Architecture and Planning at the Massachusetts Institute of Technology in 1962, and Professor of Architecture at the University of Pennsylvania in 1966. The buildings he designed tended to be monolithic and monumental yet poetic in their use of space and light. His work included such iconic structures as the Kimbell Art Museum in Fort Worth, Texas, the Yale University Art Gallery, and the National Assembly Building in Bangladesh.

After returning from a trip to Bangladesh in 1974, Kahn died of a heart attack in a men’s restroom in New York’s Pennsylvania Station. He went unidentified for three days because he had crossed out the home address on his passport. And despite his long career, he was deeply in debt when he died. Nathanial Kahn uses the unusual manner of his father’s death as a point of departure and a metaphor for Kahn’s extraordinary life.

Originally released in 2003, “My Architect” offers glimpses of Kahn’s architecture while his son talks with the people who knew him. It includes interviews with some of Kahn’s renowned contemporaries, such as architects B. V. Doshi, Frank Gehry, Ed Bacon, Philip Johnson, I. M. Pei, and Robert A. M. Stern. It also offers an insider’s view of Kahn’s eccentric family arrangements.

Tickets to “My Architect” are $7.95 in advance or $9 at the door. Tickets to the entire Nowell’s Architecture Movie Series are $27.95. To see a trailer of the film, the list of upcoming movies and to purchase advance tickets, go to www.trianglemodernisthouses.com/register.htm.

Triangle Modernist Houses (TMH) is a 501C3 nonprofit established in 2007 to restoring and growing modernist architecture in the Triangle. The award-winning website, now the largest educational and historical archive for modernist residential design in America, continues to catalog, preserve, and advocate for North Carolina modernism.  TMH also hosts popular modernist house tours several times a year, giving the public access to the Triangle’s most exciting residential architecture, past and present. These tours raise awareness and help preserve these “livable works of art” for future generations. Visit the website at www.trianglemodernisthouses.com. TMH also has an active community on Facebook.