“Most people, even architects, are surprised that the Triangle has the third largest number of Modernist houses in America,” Smart said. “Mayberry Modernism discusses why we have so many and shares photographs of over 50 eye-popping houses from past and the present.”

“Mayberry Modernism” showcases the state’s surprisingly large collection of Modernist residences from the 1950s through today, particularly those in the Triangle region. Many of these houses are in great shape, but some are endangered and many have been destroyed. 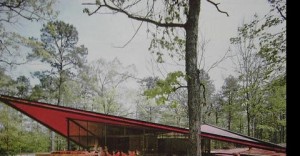 Smart’s discovery of the Triangle’s large number of “livable works of art” in 2007 led him to found Triangle Modernist Houses.com. Today, the TMH website is the largest single archive of Modernist residential architecture, and those who design it, in the nation.

George Smart is a passionate advocate for Modernist architecture who continues to facilitate the public’s discovery of the state’s architectural legacy through TMH’s extensive website, public house tours, architecture trips outside the region, dinners with residential architects, and many other events. TMH also actively preserves existing Modernist houses by maintaining the state’s largest list of Modernist properties for sale.

The North Regional Library event follows a similar presentation Smart made at the Cameron Village Library in April.

“Mayberry Modernism” is free and open to the public. For more information, please call the library at 919-870-4000.

For more information on George Smart and TMH, visit www.trianglemodernisthouses.com.

Triangle Modernist Houses (TMH) is a 501C3 nonprofit established in 2007 to restoring and growing modernist architecture in the Triangle. The award-winning website, now the largest educational and historical archive for modernist residential design in America, continues to catalog, preserve, and advocate for North Carolina modernism.  TMH also hosts popular modernist house tours several times a year, giving the public access to the Triangle’s most exciting residential architecture, past and present. These tours raise awareness and help preserve these “livable works of art” for future generations. Visit the website at www.trianglemodernisthouses.com. TMH also has an active community on Facebook.