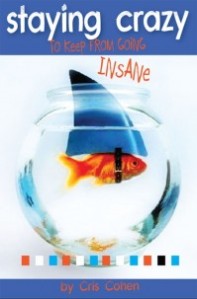 July 11, 2011 (Durham, NC) — The Hungry Intellectuals, a book and supper club in Raleigh, NC, will hold another “Meals From The Market” dinner this year to help raise funds for Durham Central Park. And the members have voted Cris Cohen’s upcoming humor book, Staying Crazy To Keep From Going Insane, as the theme for their 2011 event.

To make the annual event more fun for book club members, The Hungry Intellectuals select a book around which they create a theme for the dinner.

“The Hungry Intellectuals Book and Supper Club is very excited to use Cris’ book for our Meals From The Market 2011 dinner theme,” said club organizer Heather Curtis. “We are all too familiar with the idea of ‘staying crazy to keep from going insane!’ “

Cris Cohen of Cary, NC, is the humor columnist for the CaryCitizen.com and a prolific humor blogger. He is publishing his new book this year as a means to raise funds for a local baseball league for kids with special needs, including his own son. The book will be a compilation of humor columns he wrote for several newspapers when he lived in California before moving to Cary in 2008 and new ones he’s written since then. Proceeds from sales will be donated to the baseball league.

Cohen was invited to speak to The Hungry Intellectuals, a group of “young professionals who enjoy reading, eating, drinking and debating,” this spring. They chose his book for their dinner theme afterward.

“I am very flattered that they chose my book for this year’s event,” said Cohen. “It is possible that this decision was the result of a computer error or that most members voted while intoxicated. Although, to be fair, I think that is how most bills make it through Congress.”

The Hungry Intellectuals’ 2011 Meals from the Market dinner is scheduled for Sunday, September 18.  The group hasn’t determined the exact location yet.

Durham Central Park is a downtown destination that offers a venue for cultural activities. It is also part of a 24-hour, walkable neighborhood for arts, recreation, and locally owned businesses. The Park includes The Great Lawn, The Pavilion (home of the Durham Farmers Market) and The Skate Park. For more information, visit www.durhamcentralpark.org.

For more information on The Hungry Intellectuals, visit http://www.meetup.com/The-Hungry-Intellectuals/.

For more information on Cris Cohen and Staying Crazy To Keep From Going Insane, visit www.stayingcrazy.com.

Cris Cohen, the author of the “Nothing In Particular” blog at http://criscohen.typepad.com, and humor columnist for CaryCitizen.com, was born in Buffalo, NY, and grew up in a suburb of Los Angeles, eventually graduating from the University of Southern California. After a stint in rock radio in Los Angeles and Santa Barbara, Cris started writing his humor column for a collection of California newspapers. He eventually gravitated toward the tech world and Silicon Valley, working for companies such as Netscape and Cisco Systems. Cris, his wife Michele, and their young son Max moved to Cary, North Carolina, in 2008. His first book, Staying Crazy To Keep From Going Insane, is due out in the fall of 2011. For more information visit www.stayingcrazy.com.