Nothing to see here.

That would be true for this project in downtown Louisville if it wasn’t taking place on founder and CEO Kaveh Zamanian’s Rabbit Hole Distillery campus in the NuLu district. It would also be true if architect Doug Pierson, AIA, and Youn Choi of pod architecture + design were not designing it.

Zamanian, Pierson, and Choi first put their heads together to create Rabbit Hole’s modern, predominately metal, 55,000-square-foot distillery, which the president of the Kentucky Distillers’ Association has called “a modern monument to our historic industry.” (Rabbit Hole received the 2018 Grand Award from Modern Construction

For their latest collaboration, Zamanian’s clear vision fused with Pierson’s and Choi’s design moxie to give his idea form, function, and ample space to house three new 12,000-gallon fermentation tanks, allowing Rabbit Hole to expand its production of award-winning bourbon. Construction should begin in January 2021 and be complete by April 2021.

The tank expansion structure will be situated north of the blackened-wood louvers that surround Rabbit Hole’s “Manufacturing Atrium” where the main tank room and copper stills are located. Understanding the pedestrian nature of the NuLu neighborhood, they will position the 1100-square-foot structure to address both “Nanny Goat Strut’ and “Billy Goat Strut” alleys. Both alleys have been locally famous since the 1800s for the annual beer festival and goat races that take place there. Federal grants will soon fund a restoration of the area.

Pierson and Choi know Zamanian wants only imaginative design and finely crafted construction near his beloved distillery — a sentiment they share, of course — no matter how utilitarian its purpose or diminutive its size. They embrace his intent to respect and enrich Rabbit Hole’s hip, historic urban context.

To that end, they designed the tank expansion building as a transparent pavilion with perforated metal exterior panels that recall similar panels on the distillery. Passersby will be able to see inside.

“It will act as a kiosk-like structure that greets visitors from the Market Street greenway entrance as well as Nanny Goat Strut Alley,” Pierson explained. “It not only faces the alley but also improves it by adding landscaping and a green roof, lighting and security, and a contemporary, civic-like structure that entices people into the space.”

And because the perforated panels will be illuminated from behind, Pierson and Choi believe the building will be a lantern in the dark at night for city pedestrians and for Rabbit Hole staff walking from the distillery’s Market Street entrance.

The small, modern building will also create an outdoor courtyard for distillery visitors and staff to enjoy.

Pierson and Choi will eventually hand the project off to Luckett & Farley, the Louisville-based Architect of Record.

Doug Pierson will take professional peers through his latest project in Louisville. 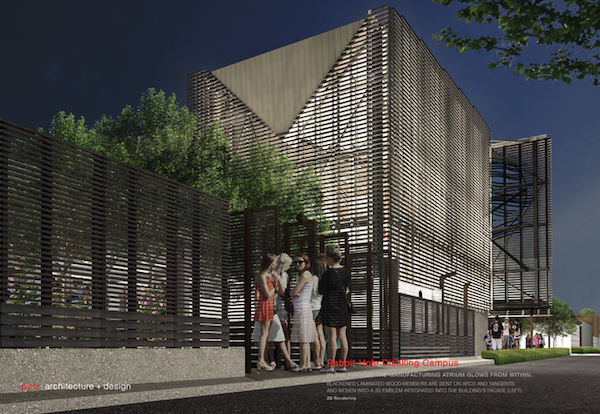 Rabbit Hole founder and CEO Kaveh Zamanian and structural/mechanical engineers from Luckett & Farley will join Pierson in giving participating architects “an overview of the inspirations, revelations, and explorations behind the Rabbit Hole distillery with the focus on structural/MEP systems, design excellence, and the user experience,” AIA Kentucky said in its invitation to members.

According to Pierson and his partner/wife Youn Choi, the design embraces the owner’s desire for transparency, as well as a “form follows process” strategy, allowing the building to take shape in response to the bourbon production process it will house.

The abundance of glass throughout the building satisfies the desire for transparency – from the inside out and the outside in. Tours will let visitors see each step along the process of creating world-renowned bourbon. During the day, the transparent/translucent structure will provide panoramic views from the inside to NuLu’s historic streetscape, downtown Louisville’s main street, and the barges and bridges along the Ohio River.

Click here for more information on the April Tour.