of Tonic Design, to the Raleigh Appearance Commission.

The City Council established The Appearance Commission in 1973 to provide guidance, advice, and recommendations regarding the visual quality and aesthetic characteristics of the City of Raleigh. The commission consists of 15 members, the majority of whom have special training or experience in architecture, landscape architecture, horticulture, city planning, or related design fields. Members serve for two years before they must be reappointed by the City Council.

The Appearance Commission also appoints standing committees for special design-related outreach and education efforts such as the Sir Walter Raleigh Awards, which recognize outstanding new contributions to the city’s character, environment, and appearance.

Hogan and her partner and co-owner at Tonic Design, Vincent Petrarca, have been the recipients of the Sir Walter Awards four times, most recently for renovating/renewing the building at 1700 Glenwood Avenue that now houses Form & Function, the building owners’ retail shop.

The Commission meets twice a month in the Council Chamber of the Raleigh Municipal Building. The meetings are open to the public.

For more information on the Raleigh Appearance Commission, go to www.raleighnc.gov. 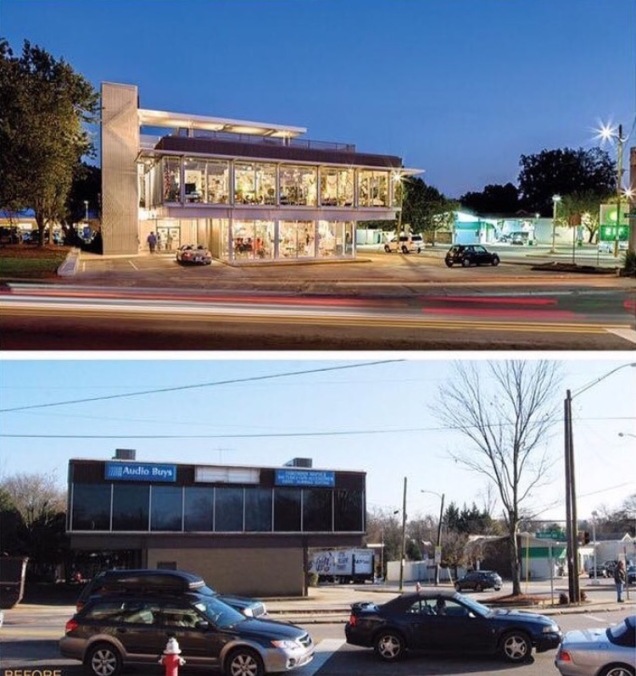 For transforming an odd, vacant eyesore into a gleaming glass, energy-efficient commercial building that deserves its place at the pinnacle of Raleigh’s Five Points intersection, Tonic Design principals Katherine Hogan, AIA, and Vincent Petrarca received a 2017 Sir Walter Raleigh Award for Community Appearance for their work on the building at 1700 Glenwood Avenue.

The awards jury called Tonic Design’s work “a well-done project in a very visible location” and noted the manner in which the 5800-square-foot structure “provides lots of light [and] awesome views from within at all levels.”

The mid-century modern, two-story building at the junction of Glenwood Avenue, Fairview Road, and Whitaker Mill houses three thriving businesses today. Yet it has fascinated passersby since 1964 when it was built for a progressive dry cleaner who enclosed the upper story in glass to show off its state-of-the-art mechanization. In 1979, an audio repair and computer equipment business took over the space and, for 28 years, Raleigh residents knew it as the “Audio Buys building.”

Audio Buys closed in 2007 and the building sat vacant for four years. In 2011, the owners hired Tonic Design, an award-winning design-build firm, to upgrade it for leasing to a new generation of tenants.

After installing new, insulated glazing, a custom shade system over the floor-o-ceiling glass walls, and zinc siding, the building could now shade its interior from glare and reduces summer heat gain by more than 70 percent. Yet it continued to languish uninhabited.

In 2016, new owners called the Tonic partners back in, this time to increase the building’s function and make it more accessible. Among other improvements, the duo created a new glass-enclosed entry, staircase, and elevator tower; transformed the existing roof into a roof garden with spectacular views in every direction; and added a two-story steel sculpture (left) by McConnell Studios, entitled “Continuum,” to the West Whitaker elevation.

Tonic’s award emanated from the Rehabilitation/History Preservation category, which honors the preservation or rehabilitation of existing buildings, especially Raleigh’s historic resources. “The designers have done a great job further repurposing a building instead of knocking it down,” the jury commented.

Tonic Design is a multi-award-winning design-build firm in Raleigh, NC. Among many accolades throughout their careers, principals Katherine Hogan and Vincent Petrarca were named 2013’s “Rising Stars” by Residential Architect magazine. Their projects have been featured in a host of national publications, including Architectural Record, Residential Architect, Dwell, Custom Homes, Inform magazine, and Metal Architecture, and locally in the News & Observer, Waltermagazine, and Urban Home.  For more information: www.tonic-design.com.